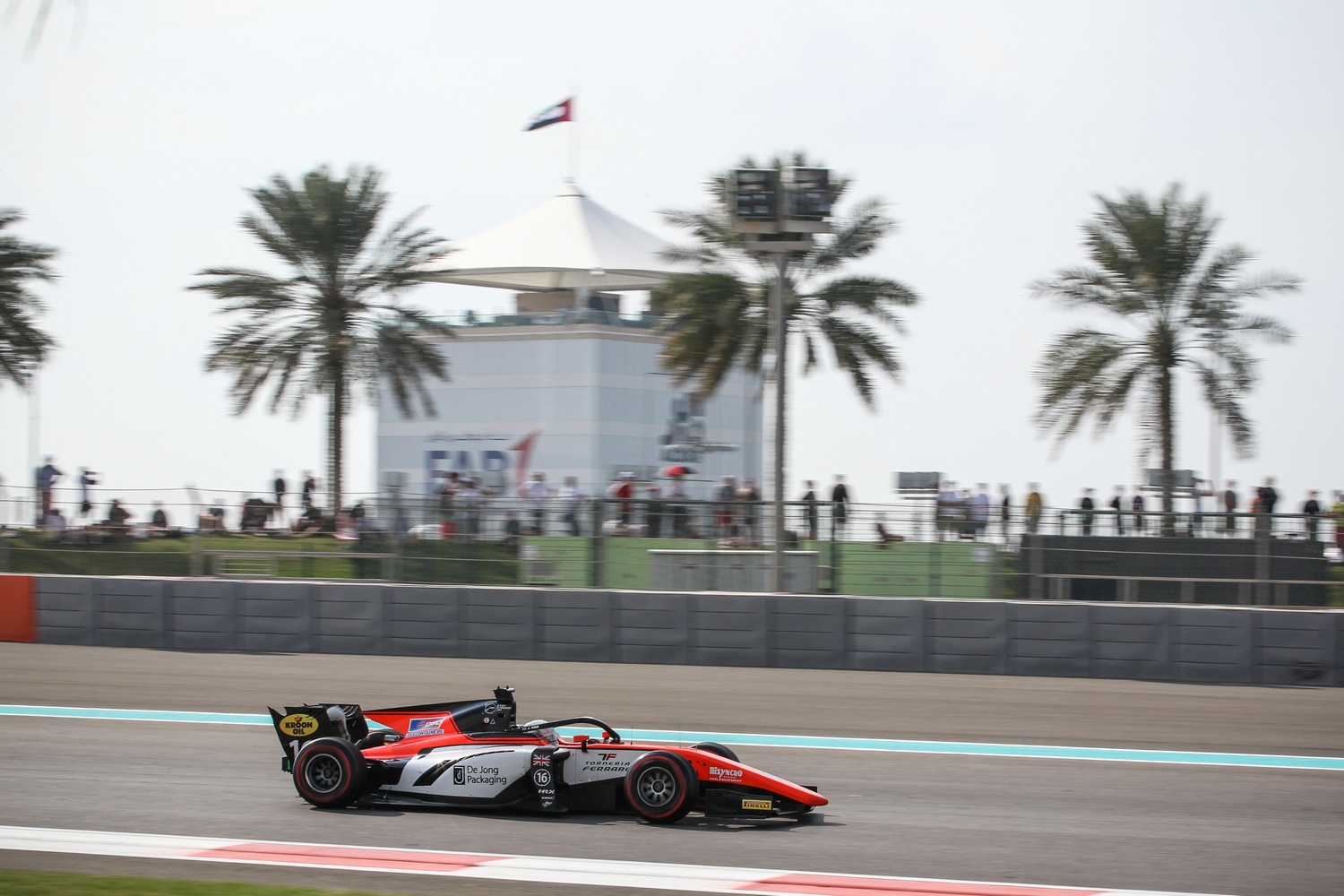 The final race of the Fia Formula 2 season took place in Abu Dhabi at the Yas Marina Circuit. The championship was already decided with Nyck de Vries as the new Formula 2 Champion of 2019.

It was 19:00 local time and 25 degrees when the Formula 2 qualifying started. Fifteen cars went out on track, and five stayed in the pitlane during the first few laps. Mahaveer Raghunathan and Jordan King went both out at the start. Jordan was 7th fastest with his first flying lap, and Mahaveer was 15th. They both did a cool down lap and a second flying lap like all the other drivers, but nobody improved their second push lap. All driver went out again for their second run on a set of super soft except Mahaveer because he saved one of his new sets for the race. This time everybody focused only on one flying lap. Jordan improved his first two sectors and had the potential to end in the top 7, but Gelael span in the last sector and Jordan had to abandon his flying lap. Jordan King finished 13th and Mahaveer Raghunathan 20th.

Jordan King started the race 12th instead of 13th. Mazepin had to deal with a penalty that he got from Sochi and this gave Jordan a free place gain before the start of the race. The start of the race itself went well for Jordan what resulted in a position gain. Mahaveer Raghunathan started from the pitlane because of a penalty that he got during practice. He got the fastest race lap during the first laps and closed the gap between him and the driver in front of him. The first part of the race wasn’t easy for Jordan. He started the race on super soft tyres but began to lose places after three laps. He made his pitstop straight away when the pitlane opened followed by Mahaveer Raghunathan the lap after that. Mahaveer’s out-lap wasn’t easy at all for him. He locked up his tyres and went off the track. Mahaveer wasn’t able to rejoin the race and had to park his car behind the wall for safety. Jordan King was 16th when he rejoint the race after his pitstop while 7 cars still had to make a pitstop in front of him. He managed to overtake Sato in lap 14 and eventually ended the race 12th.

The sprint race took place at 13:30 local time and was 22 laps long. Jordan King had a great start and moved up till position nine while Mahaveer Raghunathan moved up one place during the start. DRS got enabled after 3 laps, but Jordan King lost his advantage of the DRS in lap 6. Aitken behind Jordan had the same issue, so Jordan was in a quite safe situation. A few drivers had to stop their race during the second half of the race. Mahaveer Raghunathan profited from this and ended up being 15th. Jordan King, on the other hand, started to struggle during the last few laps. Aitken managed to overtake Jordan for position nine and Zhou took over his 10th position. Eventually, Jordan crossed the finish line with an 11th place.