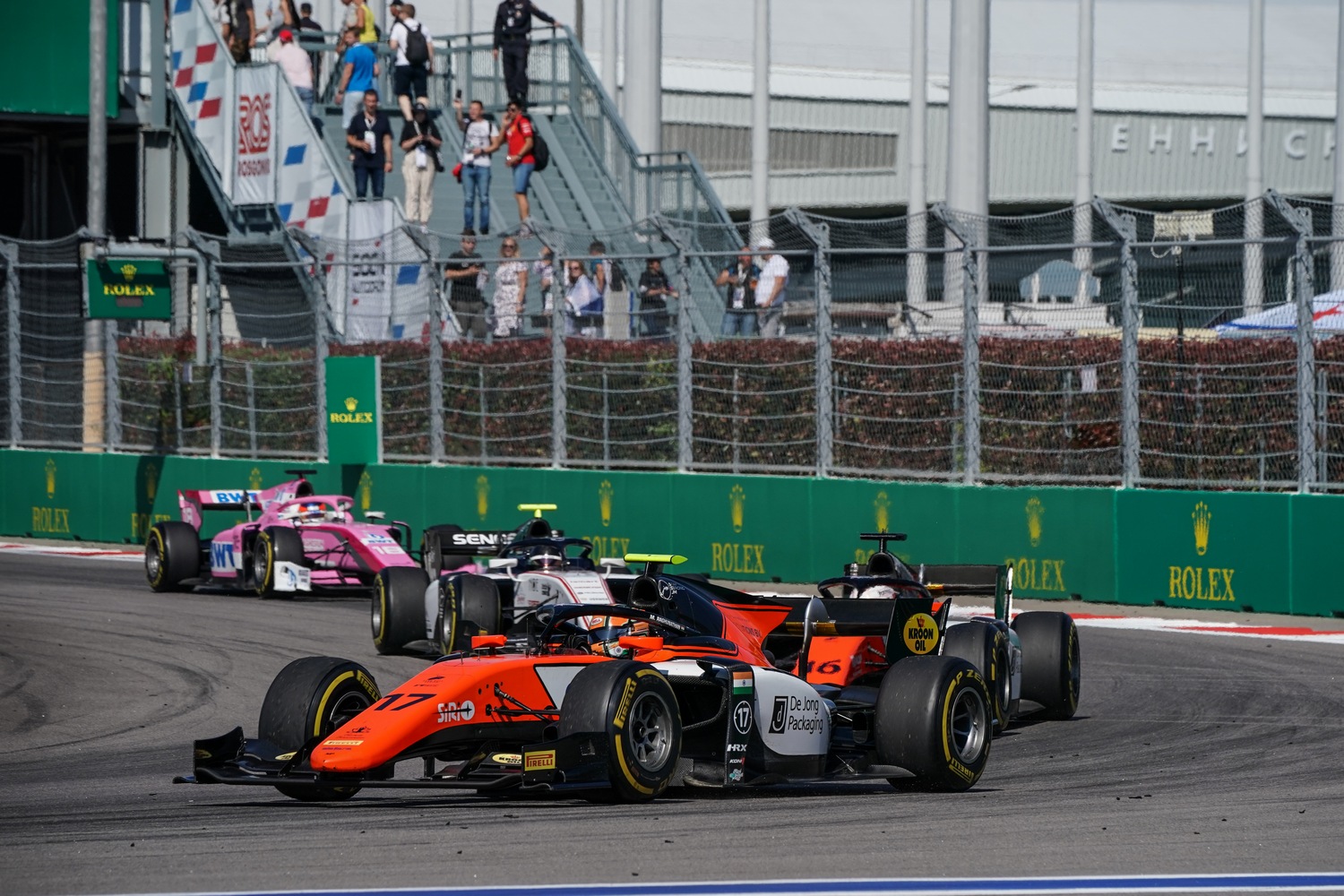 The second last Formula 2 race weekend took place in Russia at the Olympic park of Sochi.

The qualifying started at 17:00 Sochi time with dark clouds above the circuit. The weather forecast was rain for the night and next day, but it stayed dry during the qualifying. Jordan King and Mahaveer Raghunathan left both the pit lane on super-soft tyres together with the other drivers. Jordan set the 10th fastest lap time after a quick out lap and warm-up lap. Mahaveer was 19th fastest after his first push lap. The field slowed down for a cool-down lap and eventually increased the speed for a second flying lap. Most drivers improved their first and second sector, but they almost all struggled to improve the last sector. Just a small group of drivers managed to improve their personal best in the second push lap. King entered the pit lane with a 12th fastest lap time and Mahaveer 20th fastest. The second set of super-soft tyres were faster after the track improved, but all the drivers decided to go for only one flying lap, because the second flying lap didn’t do much on their first set of tyres. Eventually, Jordan King managed to set a lap time of 1:48.320 what was good enough for a 9th position and Mahaveer finished last with a lap time of 1:51.949. Pole position went to Nyck de Vries with a lap time of 1:47.440

Jordan King had a bad start after too much wheelspin. He lost three places during the first lap while Mahaveer improved a position. VSC went on in the second lap after Markelov had to end his race, but the track got clear during the same lap again. Jordan King managed to climb up to position 8th in 6 laps time just before the pit window opened. Mahaveer Raghunathan was the first MP Motorsport driver that decided to do his pitstop. He went from super-soft tyres to the medium compound tyres. The top 8 drivers decided to go for a long strategy what means that they did their pitstop during the last laps. Not much happened for a while till Schumacher had to stop his car with a technical problem. This was a free position gain for Jordan just before he entered the pitlane for his pitstop on lap 21. He came back on track at the 9th position and managed to set the fastest race lap at that time. Jordan moved up to the 8th position not much later after everybody in front of him did their pitstop. Things turned around for him soon after that. He got forced off the track, in turn, one what finally cost him three places. Jordan King got a penalty at the end for not following the instructions given by the Race Director in the Drivers Briefing Notes. When he got forced off the track, he had to stay on the left side of both Styrofoam block gates, what he didn’t. He got a 5-second penalty for that what made him in the end 12th and Mahaveer ended 17th.

Sato stalled his car at the start during the warm-up lap. A free position gain for Mahaveer before even the race started, but Mahaveer managed to gain a lot of position during the official start. He managed to stay out of problems during many collisions and crashes in front of him. The safety car had to go out, but it turned quickly into a red flag. Mahaveer was 11th at that moment and Jordan King 12th. It took an hour before the race restarted behind the safety car. The safety car did one lap before the race restarted with 15 laps to go. Jordan King overtook straight away his teammate for the 11th place. He overtook Schumacher as well a few laps later in the last chicane. Schumacher had a bad exit caused by a battle between him and Alesi. Mahaveer dropped back in the meanwhile to position 17. The last move for Jordan was in the second last lap. He managed to overtake Markelov at the end of the main straight after Markelov went wide in Turn 1. This made Jordan 9th before he crossed the finish line and Mahaveer Raghunathan ended his race 17th.