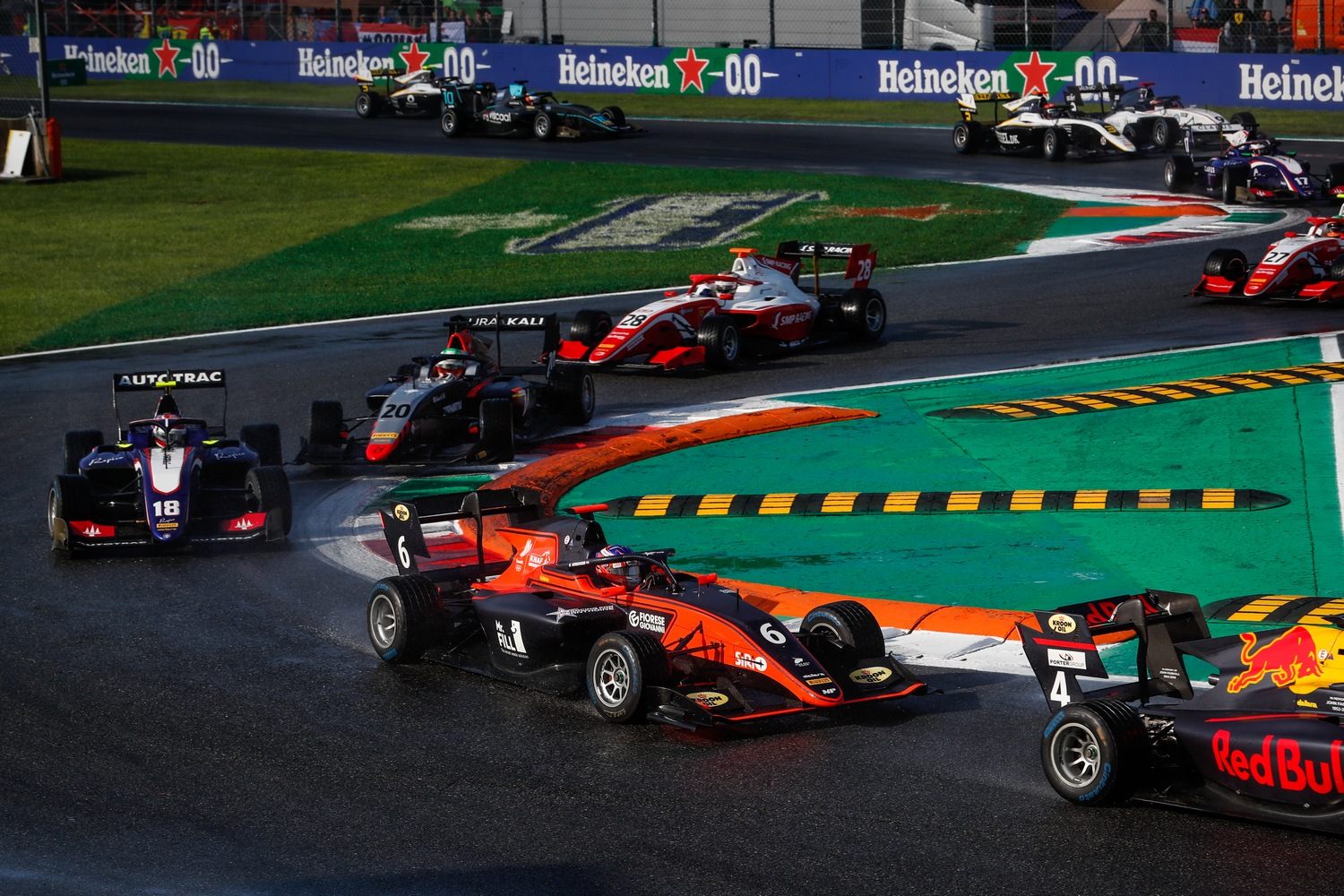 It stopped raining after the Formula 2 qualifying. Some sectors stayed damp, so each new lap was going to be a faster one during the Formula 3 qualifying. The soft slick tyres were the tyres everybody picked and went out on track with. The tyre degradation wasn’t so high because of the damp circumstances, and many drivers were able to do five push laps after each other. Liam Lawson got twice the second-fastest lap time in his first two flying laps and even the fastest lap time in the third lap. Richard Verschoor was driving around position 10 and Laaksonen around the 20th position. Richard was eventually the fastest MP driver when he entered the pitlane for a new set of tyres. He took over the 7th position, Liam was 12th and Laaksonen 18th.

The first drivers went back on track with eleven minutes to go with the rest of the field joining in the minutes after that, but nobody was able to start his flying lap or end his flying lap at all. Too many drivers were slowing down too much before the start of the Parabolica corner. In this way, the drivers could create enough of a gap to start their flying lap. In the end, the whole field of drivers were waiting in front of the Parablolica what caused a big traffic of cars. This disturbed the flying laps of others, and so the organisation decided to red flag the qualifying session. Twentytwo drivers had to come to the stewards to explain their situation or collect a penalty for it in the end. Richard, who was 8th fastest, had to start 3rd, Liam Lawson went from 13th to 14th position, and Simo Laaksonen moved up four places and ended up being 15th.

Richard Verschoor had a good start and took almost the lead, but he locked up his left front tyre and went a bit wide. He kept his 3rd position in the end when he came out of the chicane. Liam Lawson moved up one place while Simo Laaksonen had to give up five places during the first lap.Richard Verschoor lost his 3rd place in the second lap to Armstrong till the lap after that when he overtook the top 3 in a slipstream what eventually made him the leader of the race. Zendeli, the leader of the race at that time, got forced off by the Prema drivers. Richard took advantage of this battle going on in front of him and took over the lead. One lap later and Verschoor had to give up his leading position.

The safety car went out in lap eight after Vips crashed. Unfortunately, but Richard Verschoor lost another two places after the restart what made him 5th at that moment. Liam Lawson made some progress during that time and ended up being 9th.The safety car went out again after Peroni ended up literally on the wall after a mega flip at the exit of Parabolica. He managed to walk away from it but ended up having a broken vertebra. The race never got restarted and ended behind the safety car. Richard Verschoor finished the race 4th after a penalty for Armstrong, Liam Lawson finished 7th and Simo Laaksonen 20th.

The second race started under the wet conditions and ended under almost dry conditions. Liam Lawson had a bad start and fell back three places till the 5th place. Richard Verschoor took over the 4th place from Liam, but Liam managed to take it back again during the same lap. Laaksonen crossed the start line at position 24.The top 6 were all adding pressure on each other, but none of them was able to make a successful overtake till lap 11. Liam made a move on Scherer after the first chicane for the 3rd position, and Richard Verschoor managed to pass Scherer the lap after that for the 4th position. The last overtake from Liam was at more less the end of the race. He managed to overtake Hughes for the 2nd position, and that is where Liam ended his race as well. Richard Verschoor finished the race 4th and Simo Laaksonen 20th.