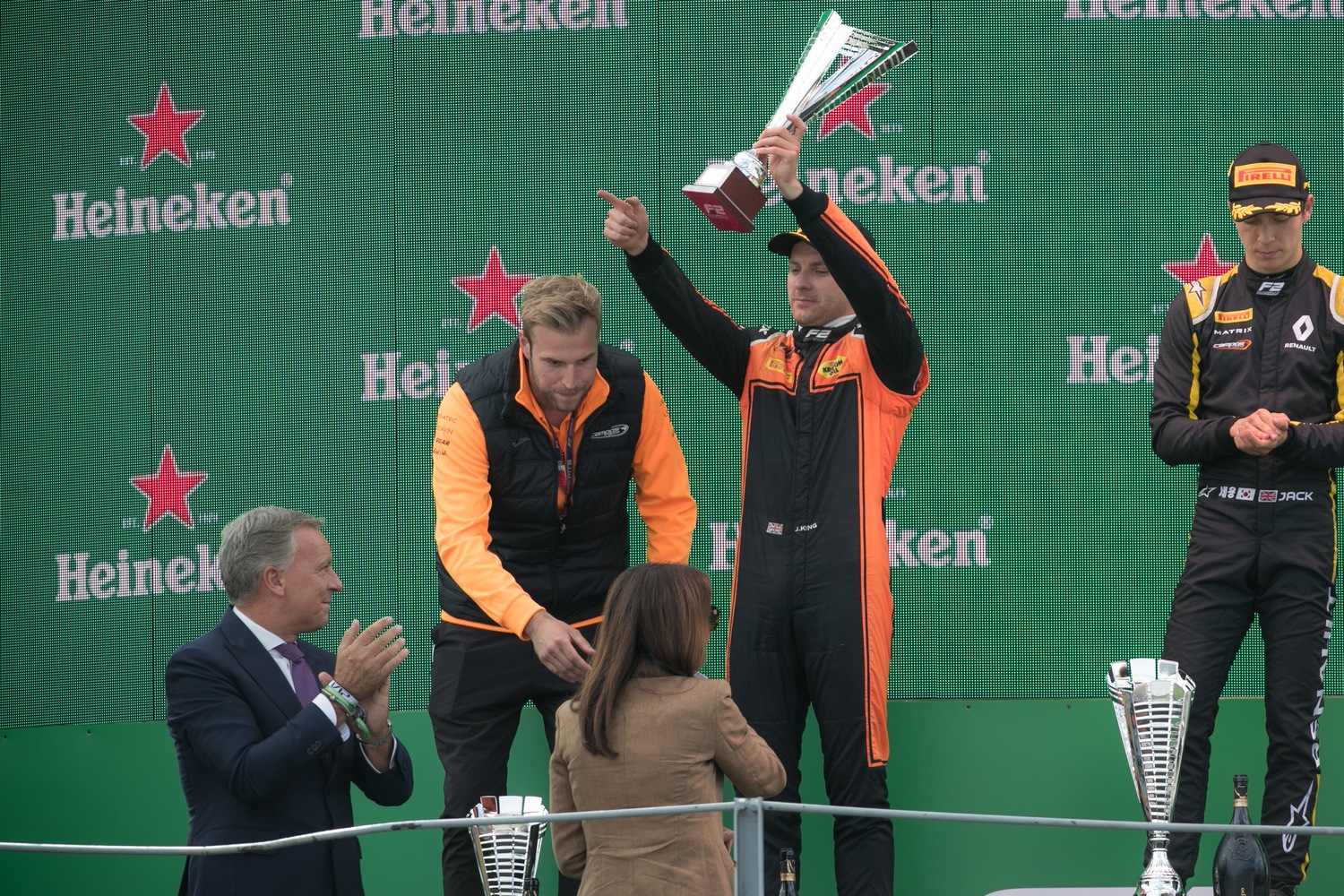 The qualifying started at 16:55 on a damp track with a little bit of rain. The drivers went out on soft tyres under challenging circumstances. The circuit was too dry for rain tyres, and it was going to improve each lap even with the new drips of rain that fell.Jordan King was 13th fastest and Mahaveer Raghunathan 17th fastest in their first push lap. The times kept improving each lap without any cool-down laps. The tyres didn’t get enough stress under the damp condition, so the longevity increased. The Red flag went out with 19 minutes to go. Matsushita span and got stuck in the gravel on the exit of the chicane. Jordan entered the pit after that with a lap time of 1:35.157 what was good enough for the 11th position while Mahaveer was 17th at that moment.Most drivers stayed in the pitlane till the last minutes when the track was on its best. Jordan King started his first push lap with three minutes to go and ended up being 8th fastest. Mahaveer Raghunathan finished his qualifying with a 16th position. Nick de Vries got disqualified after not having enough fuel in his car for a fuel sample. He had to start last what resulted in a position gain for Mahaveer and Jordan for the start of race 1.

Jordan King started his race well and gained one position at the start of the race, but Ghiotto managed to take back that place during the second lap. Mahaveer was 16th when he crossed the finish line for the first time but moved up two places after Mazepin and Deletraz got out of the race.Jordan managed to overtake Zhou in lap 6 for the 6th place while Mahaveer went in the pitlane two laps later for his pitstop and went to the medium compound tyres. Most of the drivers had an early pitstop only five cars had a long strategy with Jordan King included. Jordan did his pitstop on lap 22 and ended up being 8th after his out lap. He had fresh soft tyres and an almost empty car with fuel for nine laps. He started to improve his personal best race laps while he overtook Alesi and Galeal. Jordan ended his race with a 6th position finish, and Mahaveer Raghunathan got his first-ever Formula 2 point while he ended 10th.

Jordan King had to start 3rd after a reversed grid from the results of race one while Mahaveer Raghunathan had to start 10th. The start of Jordan was great; he managed to overtake the 2nd position from Alesi and started to add straight away pressure on Aitken. Mahaveer dropped back to the 15th position in the first lap. Lap 6 was the lap when Jordan made his successful move on Aitken for the lead. Soon after that, the VSC went on after Sergio Sette Camara span with a flat tyre. The track went green again in the same lap, and that was the moment that Aitken took back the lead from Jordan with a slipstream.Aitken went off in the second chicane a few laps later. Jordan went a bit too wide in the chicane as well. What finally resulted in a position loss to Ilot. Not for long, because Ilot went off the track and Jordan got his 2nd position back again. Jordan gets on the podium, and Mahaveer ended his race 12th.