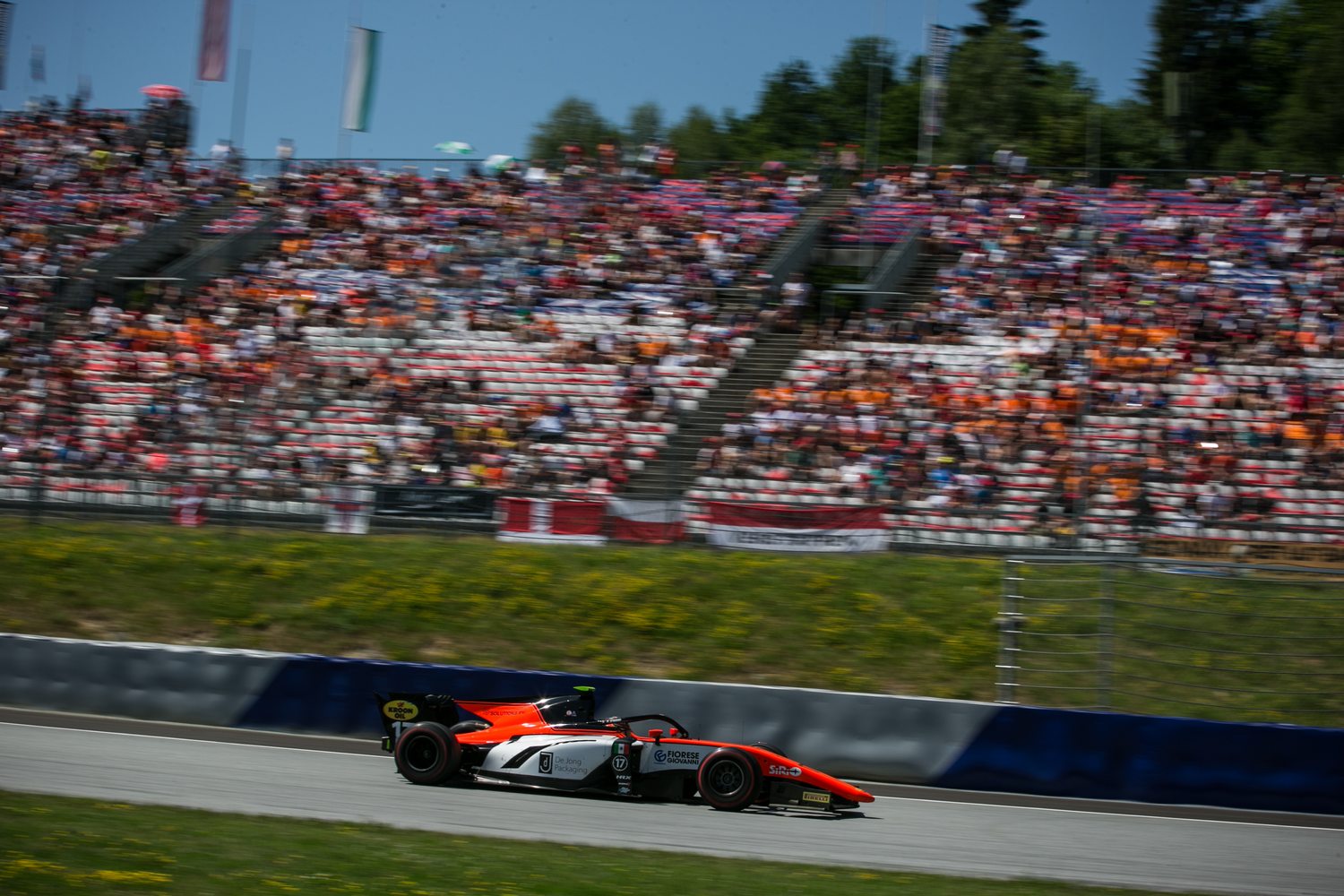 Spielberg was the 6th Formula 2 event. Jordan King and Patricio O’ward were behind the steering wheel this weekend. It was the first time for Patricio O’ward in a Formula 2 car and the circuit Red Bull Ring was new for him as well. A big challenge, but a great one to learn from it.

Team’s had to deal with the super soft compound tyres during the qualifying. The air temperature was still 30 degrees when the qualifying started at 16:55, and for Patricio O’ward it was going to be his second outing ever in the Formula 2 car. Jordan King was 15th fastest when he completed his first push lap followed by Patricio O’ward (16th). Jordan managed to improve the first two sectors after his cool-down lap but wasn’t able to do a faster lap overall. Their positions stayed the same when they went into the pit for a new set of super softs. The second run improved a bit, but not enough. Jordan King managed to stay 15th with a lap time of 1:15.139 while Patricio O’ward had to give up one position. O’ward ended his qualifying 17th with a lap time of 1:15.327

It was around five years ago since Patricio O’ward did his last standing start. When you race in the USA, you do rolling starts, so it was no wonder that his start wasn’t so spectacular. Patricio lost three places during the start but managed to recover from it in the same lap. Jordan King had a great start and gained five positions in the first lap. Jordan King started the race with the softest compound of tyres and began to struggle quickly with the grip of it. He dropped two places before he went in for an early pitstop in lap 7. The pace of Jordan was quite good around lap 15 when his lap time was just 0,2 sec away from the fastest race lap at that time. O’ward had to find some extra speed, but he was improving his personal lap times.

Jordan King closed the gap to Sérgio Sette Câmara to a difference of 0,7 sec, and he was able to use his DRS again, but overtaking wasn’t easy, so he decided to use the slipstream to save his tyres. Zhou managed to pass Jordan King in lap 29 after staying the whole race behind him, and some laps later Jordan made his move on Ilott for the 9th place. Mazepin was the only driver that had to do his pitstop and after he did that Jordan moved up to the 8th position. Jordan ended the race 8th what gave him the pole position for the sprint race on Sunday. Patricio O’ward finished the race 20th.

A good start for Jordan King! For a moment, it looked like he had to accept the second position but he managed to stay on first. Patricio O’ward moved up to the 16th position. King lost his first position to De Vries during the second lap. Two laps later the car of De Vries slowed down and King could take over the lead again for a short moment till Deletraz took it over. Patricio moved up to position 14th during the same time. It was between lap 8 and 12 when King started to struggle to keep his positions. He lost at that time four positions and ended up being 6th. King had to defend his position again in lap 15 when Schumacher started to add pressure. He could keep him behind for two laps but eventually had to give his 6th position away. O’ward moved up to the 13th position at that time.

Deletraz got a big moment in turn 1 and span off the track into the wall. This resulted in one position gain for King and O’ward. A safety car went out in lap 22 and the restart of it went clean. O’ward struggled a bit more and had to give up two position two laps later after the restart and finished the race 14th while King ended in the points on the 7th position.