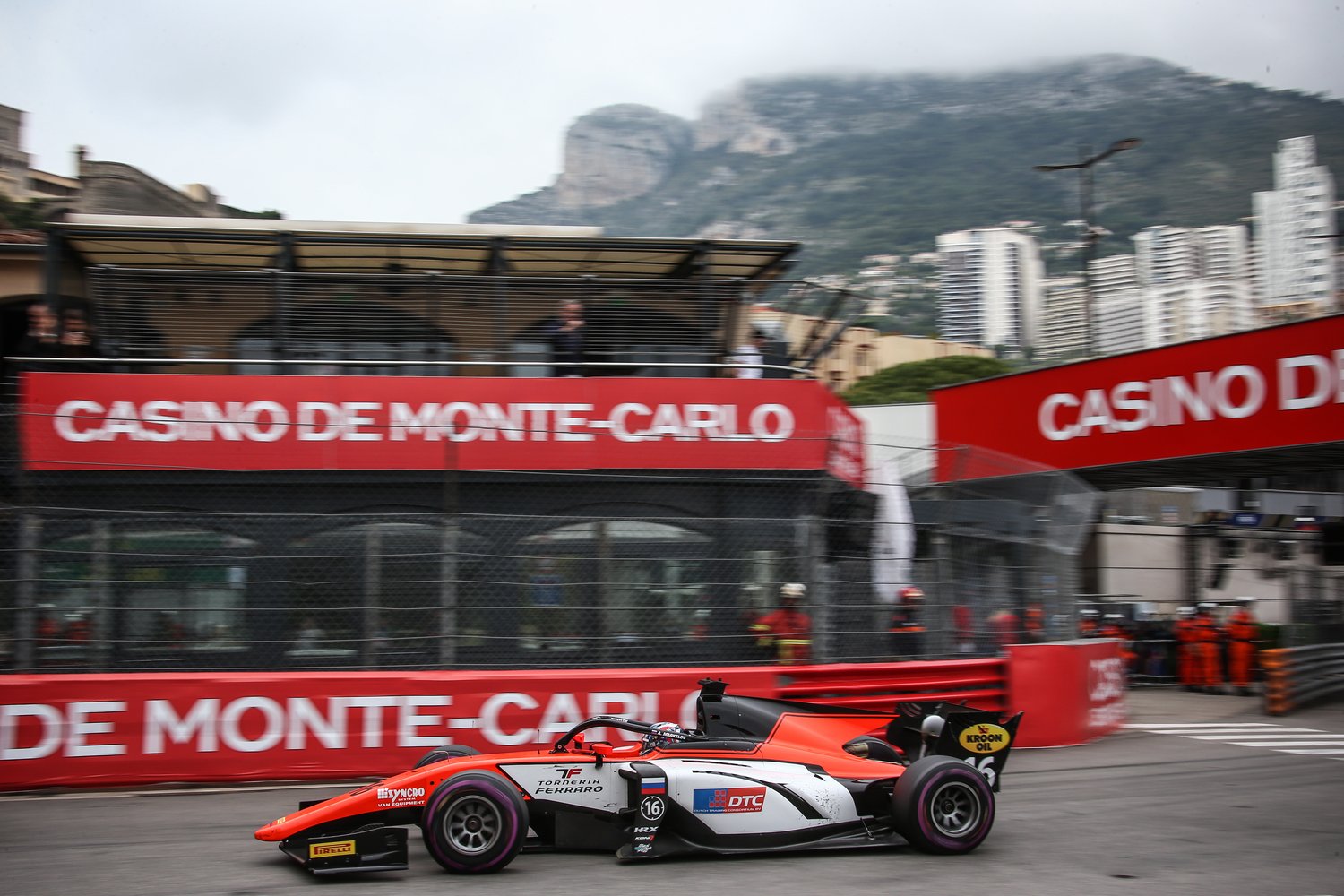 Monaco is a small circuit, and there is not much space to claim and give other drivers enough room to get a clean qualifying lap. For this reason, the organisation decided to split up the field in two groups of 10 drivers. A group of even start numbers and a group of uneven start numbers. Mahaveer Raghunathan had to start with his group the qualifying at 13:20 local time. Most drivers went out on a used set of tyres to get a feel of the track conditions before they went on a new set of super softs. All drivers had only 15 minutes to place a lap time, so there was only time enough for one set of new tyres. Mahaveer made a lap time of 1:26.638 and was 10th fastest in his group. Artem Markelov went out with the second group, and he was second fastest with the used set of tyres. He eventually dropped back to the 6th position in his group after the run on new super softs. Artem’s group was much faster than the first group, so Nick de Vries, who was the fastest with a 1:20.676, got the pole position. This meant that Artem had to start 11th overall.

The race started with an extra formation lap after Ilott stalled his car. The second start went without problems. Artem Markelov had to give up one place while Mahaveer Raghunathan gained a position because of Ilott. The pitlane went open after six laps, and many drivers changed from supersoft to soft tyres. Markelov overtook in the meanwhile Boschung in the last two corners and profited from a mistake of Boccolacci a few laps later. Mahaveer decided to do his pitstop in lap 14 and changed his tyres to the soft compound. The race got stopped with a red flag with 21 laps to go. Mick Schumacher tried to overtake Tatiana Calderon in the second last corner, but the gap was too small. Mick hit the rear of Tatiana what caused her to spin and block the road for everybody. All the drivers that drove behind Mick Schumacher got forced to take the pitlane and had to stop in front of the red light. The drivers in front of Mick got a big advantage because of this situation. They could finish a full extra lap before they had to go into the pitlane. In other words, the top 8 drivers lapped everybody as well Markelov he was on the 5th position at that time. Markelov changed his tyres from soft to supersoft in the pit under the red flag situation (this is allowed) and restarted the race at the 5th position. Artem made, unfortunately, a mistake on track what caused him to lose three places. In lap 37 Markelov decided to do his official pitstop and changed his tyres again to super soft. This was a good move because most top 8 drivers changed their tyres to another set of softs. A strange thing because this meant that these drivers would have to start on a used set of soft tyres for the sprint race (the soft compound is the hardest compound and will last longer). Markelov comes back on track at the 8th position and finally crossed the finish line 7th after Correa crashed in the exit of the last chicane. Mahaveer finished 15th but got a penalty after an incident with Aitken what finally made him 16th.

Markelov had to start 3rd after Ghiotto got penalised in race one, so Artem moved up to the 6th position what results in a 3rd start position for race 2. The start of Artem wasn’t great, and he had to give up one place to Zhou. Artem Markelov kept pushing and added much pressure on Zhou lap after lap, but he wasn’t able to overtake him. Ghiotto tried to make a move on Mahaveer Raghunathan in the hairpin, but that didn’t work out, and both drivers ended up in the wall in lap 8. Artem stayed the whole race very close to Zhou but had to accept his 4th position while he crossed the finish line at the end of the race.