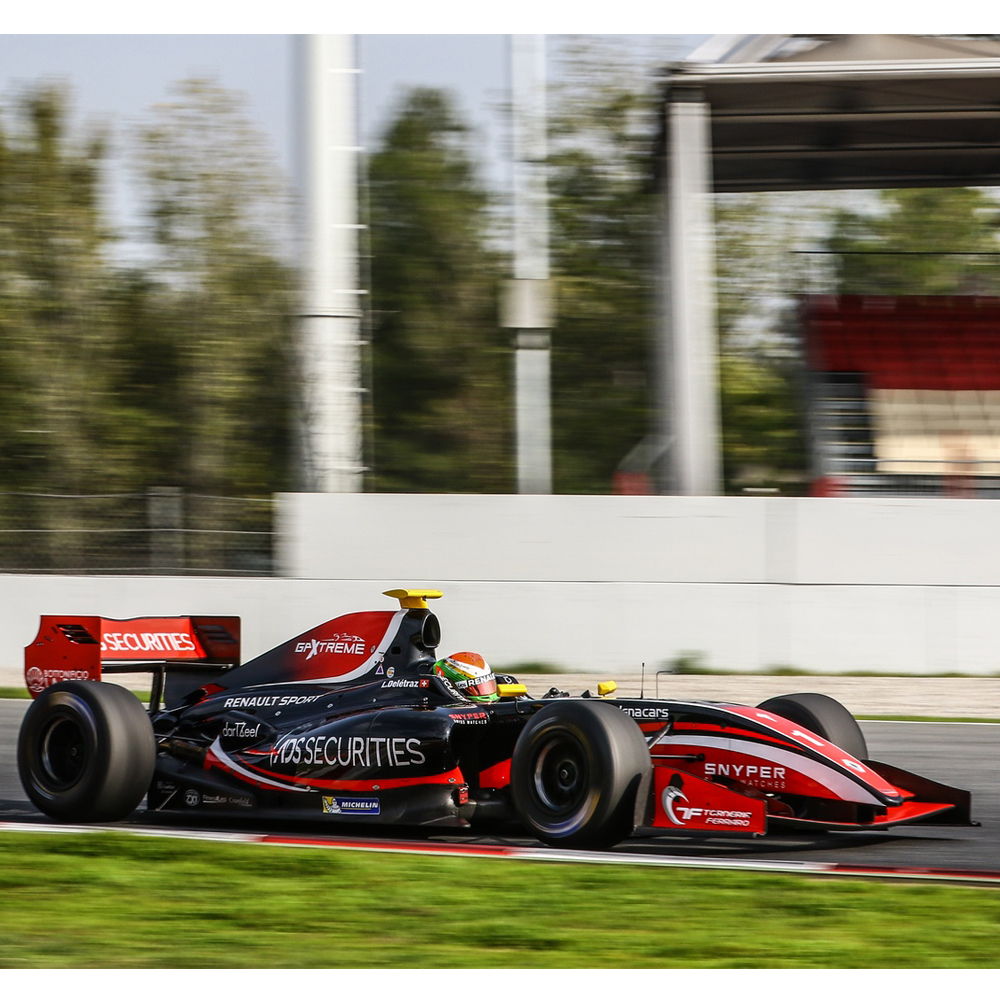 With two race wins, three pole positions, nine podiums, 13 rookie wins and the rookie title accolade under his belt, Renault Sport Academy driver Louis Delétraz concluded his inaugural Formula V.8 3.5 season as deputy champion. Fortec Motorsports teammate Pietro Fittipaldi also finished his maiden season on a high by achieving his first main series podium at the Circuit de Barcelona last weekend.
Swiss native Delétraz entered the ninth-round collective test leading the championship in Catalunya on Friday. He ended the afternoon session in P3 and as best rookie of the field with Fittipaldi setting the fifth fastest lap time as fastest rookie in the morning and P7 in the afternoon. Overnight rain made for slippery track conditions in the early part of qualifying on Saturday morning. The session saw Delétraz set the fourth quickest lap on wet weather tyres with Fittipaldi achieving P8 to sit on the fourth row of the grid for the start of race one.
Following an additional formation lap due to the #21 RP Motorsport stalling on the grid, the lights finally went out to start the penultimate race of 2016. Delétraz and Fittipaldi took the fight to the leading pack in the opening laps, with the Swiss driver passing Matthieu Vaxiviere (SMP Racing) on the straight to claim P3 on lap four. On lap 19, as Delétraz continued to worry the gearbox of Tom Dillmann, he forced the AVF driver to run wide in a manoeuvre that afforded him second position. With team mate Fittipaldi claiming seventh place at the chequered flag, Delétraz crossed the line six points ahead in the championship with his 13th rookie win and the second placed podium trophy.

Qualifying on Sunday morning was a closely contested battle; initially declared a wet session conditions improved as the runs progressed offering the drivers a chance to use slicks when a dry line emerged. The incident filled session saw Delétraz snatch his third pole position with a lap time of 1:31.953 at the chequered flag with Fittipaldi completing the session in P5.
The final race of the Formula V8 3.5 season delivered plenty of breath-taking action at Circuit de Barcelona-Catalunya. Another stalling incident on the grid caused an additional formation lap and reduced the race length to 38 minutes plus one lap. When the lights went out Delétraz experienced a tough start from pole and was passed by Isaakyan, Nissany and Fittipaldi. He completed his mandatory pit-stop on lap six and returned to the track behind championship rival Dillmann which was to seal his championship title fate.

In a Fortec Motorsports team strategy that was to provide Fittipaldi with his first overall series podium, the Brazilian pitted on lap nine. He returned to the action in third place and maintained position with pace and determination until the chequered flag. Delétraz crossed the finish line in fourth position, narrowly missing the opportunity to wear the overall title crown
2016 Rookie Champion Delétraz attained the 2016 Formula V8 3.5 deputy champion accolade on 230 points. Pietro Fittipaldi concluded his maiden Formula V8 3.5 series rounding out the top ten in the Drivers’ Championship, with Fortec Motorsports finishing in fourth place, just three points shy of third, in the 2016 Teams’ competition