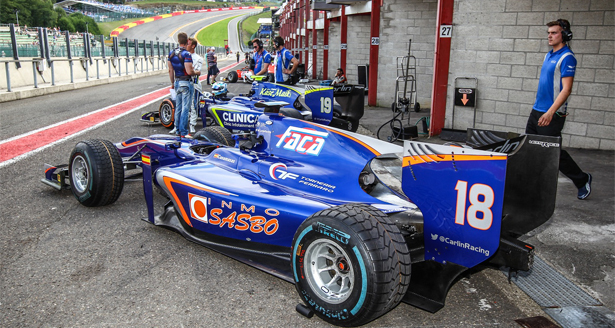 After the summer break, the GP2 Series returns with 9th stage in the beautiful circuit of SPA-Francorchamps.

Carlin team, Draco Marketing Partner, back on track with Kirchhofer and Canamasas. The latter, replaced by Binder in the Hockenheim stage, won points in Sunday’s race after a good weekend in addition to other good results in the season, as the fifth place in Montmeló and the sixth place in Baku.

In race 1, Canamasas crosses the finish line in 12th place, having started in the 8th row, while his teammate Marvin Kirchhofer comes out on the first lap and therefore he has no chance to recover.

In race 2, the spanish driver Canamasas gets the 10th place, but thanks to some penalties imposed on other drivers, in the final classification he goes up to 7th position. Kirchhofer reaches 14 °.

The next stop will be in Italy, in Monza, on 3 and 4 September.