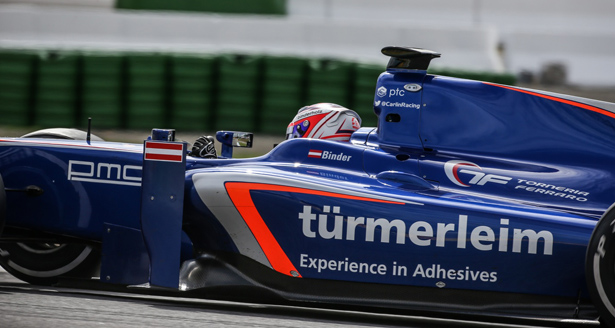 Carlin is pleased to welcome Austrian racer René Binder to the fold for the GP2 Series race in Hockenheim the weekend just gone. Binder has already gained experience in the competitive Series and has spent his 2016 season competing in the Formula V8 3.5 Series – lying fifth overall.

24 year-old Binder undertook his first competitive race season in 2009 and has since competed in Formula Three and Formula Two cars before progressing to Formula Renault 3.5 machinery and the GP2 Series. So far in the 2016 season Binder has already scored four podiums in his Formula V8 3.5 litre car which has placed him nicely in fifth position in the season standings.

During the first weekend in GP2 Series, Binder won the 8th row of the starting grid and the 13° place in Race 1. Sunday in Race 2 he arrived at the checkered flag in 15th position.

His teammate, Kirchhofer, is started from 5th row saturday for the first race and he finished 10th. In race 2 Kirchhofer came 14th.

Next meeting on 27 – 28 August at Spa-Francorchamps in Belgium.