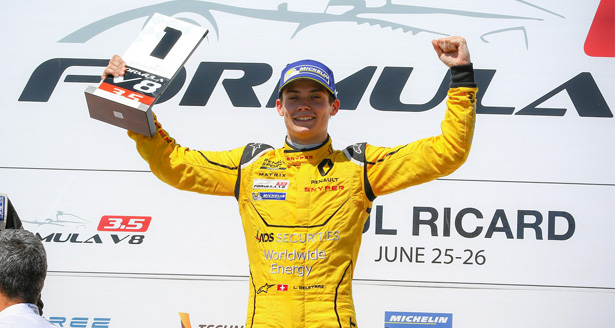 Louis Deletraz on the highest step of the podium in the French circuit of Paul Ricard. The Fortec driver, team partner of Draco Marketing, won Race 2 in the fourth stage of the V8 3.5 championship season, second victory after the one in the opening weekend at Alcaniz.

Saturday in Race 1, Deletraz had started in the third row and then he crossed the finish line in 6th place. In the second qualifying he had won the 2nd row on the grid, behind Roy Nissany and Egor Orudzhev. In the race, the Swiss Fortec driver got it right in the strategy with his team that called him into the pits for the mandatory pit stop on lap eight.

Continuing the race with new tires, Deletraz has recovered much compared to the firsts drivers who stopped 4-5 laps later and they returned on track behind him. With this victory, the Fortec driver is even closer to the first in the standings, Dillmann, with just 22 points between them.

In the top ten in race 2 also his teammate Pietro Fittipaldi, who won the 7th place, recovering several positions to the start.