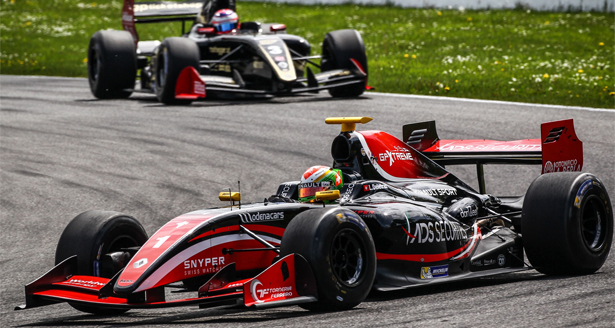 After Alcaniz and the Hungaroring, the third leg of the Formula V8 3.5 took place this weekend in the SPA-Francorchamps circuit.

Fortec Team, Draco Marketing Partner, was on track with Louis Delétraz, who struggles in the first places to win the championship, and Pietro Fittipaldi. The two Fortec drivers have immediately started on the right foot with the fourth and fifth place in free practice on Friday and the third place in the second session for Delétraz.

In qualifying, Delétraz got the third row of the starting grid for Race 1, where on Saturday he carried on a great show crossing the line in 3rd position and has again won the podium. Fittipaldi finished the race in 10th position.

After another good qualifying, in which Delétraz got the third row, on the SPA circuit has shot down a storm just before Race 2. Due to poor track conditions, Delétraz has stagnated at the start of the formation lap and he could not face the start, that took place after three laps behind the safety car. Both Fortec drivers have retired, along with half of the other drivers.

After 6 races, Delétraz is 2nd in the championship standings, battling with Dillmann of the AVF, first opponent in the fight for the title.