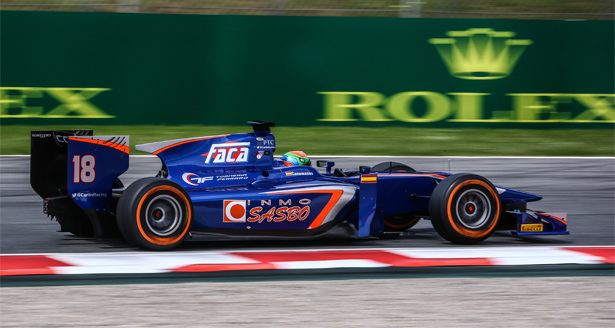 Sergio Canamasas took two top ten finishes for Carlin in Barcelona this weekend, with a fifth place finish in Saturday’s Feature race a highlight. The Spaniard put in a great performance in his home event, at one point challenging the top three on Saturday, despite starting from 15th on the grid. Team mate Marvin Kirchhöfer endured a difficult GP2 debut, with contact on the first lap on Saturday ruining his race and forcing him to pit for a new front wing early on. The young German crossed the line in 16th, taking 15th place in Sunday’s Sprint race.

Starting from 15th and 16th on the grid respectively for the first race of the season on Saturday, Canamasas and Kirchhöfer had their work cut out as the first Feature race of the season got underway in Barcelona. Canamasas took every opportunity at the start, immediately moving up to 8th by the end of lap one, while Kirchhöfer was 18th. Kirchhöfer would later pit for a new front wing after receiving contact, although he would have to stop again later in the mandatory pit window.

Having moved up to seventh, Canamasas made a fantastic move around the outside of Gustav Malja for sixth place once the first safety car period of the race came to an end. By lap 17, Canamasas was still 6th, keeping with the leaders who were yet to pit. Kirchhöfer was 19th having made a second pit stop for new tyres.

Canamasas pitted for his new tyres just as the second safety car period got underway, and after a quick stop by the Carlin mechanics emerged back on track in fourth place. The Carlin driver held onto the position before he began to struggle with tyre wear and after several laps of defensive driving was finally passed by Artev Markelov.

The final safety car period of the race came after Antonio Giovinazzi and Raffaele Marciello made contact, with the race ending under safety car conditions with Canamasas classified fifth and Kirchhöfer 16th.

Lining up fourth for Sunday’s reverse grid race, Canamasas was targeting more points as the Sprint race got underway. Canamasas made a strong start, holding off Pierre Gasly behind to hold onto fourth while Kirchhöfer had moved up to 14th from his 16th placed grid slot.

Canamasas would lose fourth to Gasly once DRS was enabled, allowing the French man to take advantage, and similarly Kirchhöfer was struggling to keep Antonio Giovinazzi behind.

After also being passed by Nicholas Latifi, Canamasas was running in sixth place, but the Carlin man would later close back in on the Dams driver, who in turn was fighting Raffaelle Marciello for fourth place meant Canamasas was right with them by lap 14.

A big accident for Giovinazzi brought out the only safety car of the race, bunching up the field with Canamasas now running ninth and Kirchhöfer 15th. The order would remain for the Carlin men until the chequered flag, with two top ten finishes for Canamasas and plenty learnt by Kirchhöfer in his rookie GP2 weekend.

The Carlin team will be back in action in two weeks’ time for the Monaco round of the 2016 GP2 Series.