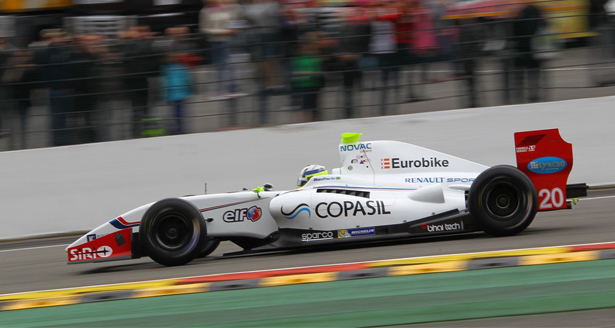 A mechanical issue to a suspension stopped Pietro Fantin in Race 1 at Budapest, as the Brazilian and Draco Racing lined-up for the fourth round of the 2015 World Series by Renault. After setting the 8th fastest lap of qualifying 1, Fantin was fighting his way towards the top-5 when a faulty left front suspension arm forced him to retire. The team is investigating the problem to find the possible causes. Fellow Draco racer Bruno Bonifacio, who was battling among the points zone, was forced to yield due to excessive tire wear, settling for the 12th place.

Draco Racing went close to achieving a podium finish in Race 2 at Budapest, in the fourth round of the 2015 World Seried by Renault held at the Hungaroring venue. The Italian squad fought for the top-3 with Brazilian Pietro Fantin, who eventually crossed the line in fifth. After the race though, he was assessed a 10-second penalty for crossing the white line at the exit of the pit-lane. Pietro had also been involved in an early contact with Roberto Merhi that had cost him some valuable ground.

After starting from the 10th row on the grid, Bonifacio had to deal with an underpowered car, as he collected a visor tire-off that got stuck in the radiator air intake and caused the engine to go in protection mode.

“I’m happy for the pace we had throughout the race. In qualifying we went well, improving yesterday’s position, and at the first corner I was fighting for the second place after a good start. The team did a great pit-stop and I’m quite disappointed for the penalty that actually put us out of contention for the podium. Now we have to work hard and find a way to improve a couple of tenths of a second in order to be at the front in qualifying”.

“There is something wrong, and we have to understand what it is because these are not the positions we aim for. During the race, I collected a visor tear-off that compromised the performance of the whole run. We only realized it after the parc fermé, so we couldn’t remove it during the race. I’m sure that we have the potential to win and in the next few races we have to work hard in pursuit of this goal”.

The next round for the World Series by Renault is scheduled for the 12th of July at Red Bull Ring.

Download the free APP “World Series by Renault” on your phone to stay updated on all news of the season.