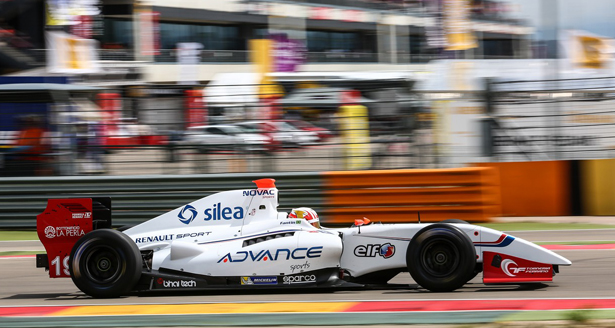 Draco Racing enjoyed a positive day at Motorland Aragón as the team captured valuable points in the opening race of the Formula Renault 3.5 championship. Pietro Fantin was able to deliver a spectacular comeback: after having to settle for the 10th place on the grid in qualifying, the Brazilian moved up to the 6th position by the end of the day and collected 8 points.

Fellow countryman Bruno Bonifacio was also a big mover, climbing back from the 9th row to an 11th place finish. He also ended up as the fourth best rookie. After performing in solid fashion with the low-downforce aerodynamics mandated for Race 1, the Draco Racing drivers will be back in the hunt tomorrow with the high-downforce package.

In race 2 Sunday, International Draco Racing lined-up, and despite the treacherous weather conditions, the team was able to capture a points finish with Bruno Bonifacio. The Brazilian, who started from the 15th place, worked his way up the field and crossed the line in 11th before being promoted to 10th due to a penalty assessed to a rival car. In addition to scoring his maiden championship point, Bonifacio also climbed up to the third step of the rookie podium.

Fellow Brazilian Pietro Fantin, who delivered a positive 5th place in qualifying, was slowed down by a gearbox issue at the re-start. Due to the heavy rainfall hitting the track, race control decided to start behind the safety-car and then red-flagged the session forcing everybody on-track to come back to the pits. The action went back underway when the weather improved, but Fantin lost valuable time and was forced to settle for 11th.

Race 1 – P6: “Bringing home some points is definitely positive. We know we still have some work to do in low-downforce trim, but we did well and also collected a positive feedback for Spa-Francorchamps. In qualifying, I suffered from a bit of understeer, while with the full load of fuel it went to oversteer during the race. Anyway, the car was reasonably consistent. My best laptime of the day, 1’45″143 is not bad, but I think we’ll be more competitive with the high-downforce package”.

Race 2 – P11: “My race was jeopardized by a gearbox issue, as it got stuck to second gear at the re-start. At that point, I lost six places that I could not recover. It’s a pity because the potential we displayed in qualifying was noticeable. In race conditions, the car was pretty balanced, and that’s exceptional if we consider the ever-changing weather. We opted for a dry set-up and I tried to do what I could to recover”.

Race 1 – P11: “I managed to get to the end of my first Formula Renault 3.5 race by fighting hard and recovering positions. A few years ago I was watching Roberto Merhi on the TV, and battling with him in person was very exciting. Generally speaking, we continue to make small steps in the right direction, and I’m very happy for that”.

Race 2 – P10: “It was an exciting race. It’s been fun and I think we provided the fans with a great show. Once again I fought with Roberto Merhi, a driver that I consider one of the most competitive nowadays, not only in this championship but also at world level. We also scored our first point which came thanks to a good strategy and a consistent performance without driving mistakes”.

The next round for the Formula Renault 3.5 championship will be on the 24th of May in the exciting frame of the Monte Carlo Grand Prix.