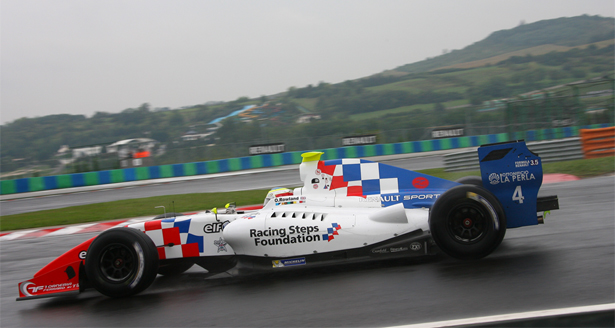 Still a great weekend for Oliver Rowland of the Fortec team, Draco Marketing partner, who brings home valuable points for the championship in each race. Already in the free practice, the english driver had won the firsts places, but in qualifying he showed all his potential, getting the Pole Position. An exceptional result considering that the driver is a rookie in the league and the track conditions were very tricky, with rain and cold.
At the finish of the first race, Rowland rose on the third step of the podium. In the second qualifying, the Fortec driver earned 4th position, which he held for the entire race until the checkered flag.

With a 3rd and 4th place, Rowland remained among the best drivers in the championship and he is currently in 4th place in the overall standings with 123 points.

Unfortunate week-end for his teammate Sergey Sirotkin who in previous races has been very successful, so as to make his debut in Formula 1 with Sauber team in the first free practice in the next Grand Prix in Sochi.
Sirotkin has had problems in qualifying and he was forced to start in last place, catching up to the 14th position. In the second race, a contact with Stevens at the first turn sent the Russian out of the track, slamming against Latifi and forcing him to retire.

The next round of the World Series by Renault 3.5 will be at Le Castellet on 27 and 28 September.