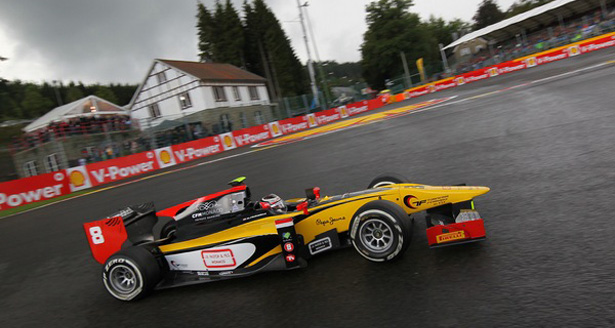 This weekend the GP2 Series appointment was held in the circuit of Spa Francorchamps, Belgium. Below is the report of the races of the DAMS driver Stéphane Richelmi, supported by Draco Marketing and its Partners.

The first GP2 race of the weekend in the circuit of Spa in Belgium welcomes drivers with a violent rain that becomes the protagonist of all the misfortunes on the track.

After starting in fifth row, Richelmi makes the first few laps and decides to stop for the pit-stop, just before the decision by the marshals to wave the red flag and stop the race due to bad weather. After about half an hour, the drivers restart, even if the conditions continue to remain difficult and Richelmi is forced to stop again.
After 25 suffered laps, the DAMS driver ended the race in 21th position.

After saturday’s race ruined by rain, Stéphane Richelmi had to start sunday from the last rows in the “sprint race” of just 18 laps without mandatory pit stop. The DAMS driver has recovered lap after lap in the spectacular belgian circuit of Spa, and he crossed the finish line in 12th position, with an overall recovery of 9 places.

Unfortunately, despite the great race this morning, Richelmi couldn’t bring home points this weekend, but he will recover during the next round of the GP2 Series championship to be held in Monza, Italy, on 5-6 September.