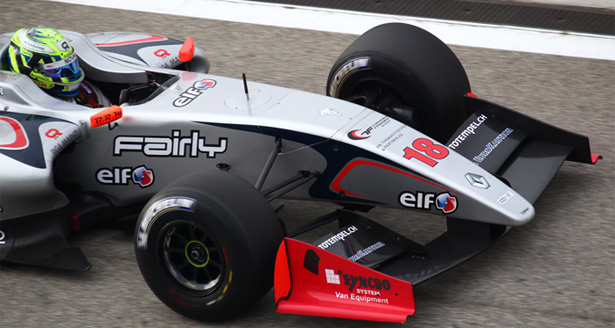 One day, two podium finishes: the F.Renault 3.5 Saturday in Paul Ricard proved to be quite special for Draco Racing, as the Italian team managed to collect two trophies. The first one was awarded to André Negrao in the morning, as the Brazilian talent was promoted to 3rd place in Race 1 after Kevin Magnussen was excluded due to a technical infringment on his car.&#8232;The second one was clinched in the afternoon by Nico Muller, who drove an amazing race to take the flag in P2.

Muller’s day started on a high with a top-notch performance in Qualifying that saw him clock the third quickest time, but the race was even better. Nico’s start was great and allowed him to stick to P3, but on the Mistral straight Da Costa made the most of a low downforce setup to overtake him. Still quicker than the Portuguese driver on a full lap, Muller managed to follow him closely, and then when it was time for the pit-stop he made a difference with perfect in and out laps. That allowed him to pass both Da Costa and Sorensen when they performed their mandatory tyre change, and to sail away until the end of the race and take the flag in 2nd place with a 4 second gap on the closest rival.

Negrao, in the meantime, had to start from P14 after struggling with traffic in Qualifying. Thanks to a medium downforce setup he was quick on the straights and could pull some good overtaking moves, finishing in P11.